Labour has won the Bitterne by-election, beating the Conservatives by just 13 votes.

The by-election was held following the death of Conservative councillor Terry Streets in late August.

This by-election result changes the composition of Southampton City Council to 27 Labour, 20 Conservative and one Liberal Democrat. 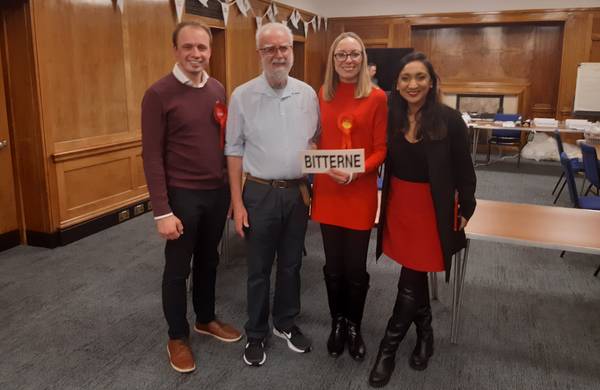 The new Labour councillor, Yvonne Frampton, pictured second from right, said: "I am really really pleased and delighted the people of Bitterne put their trust in me and the Labour party in the Bitterne by-election.

“I am looking forward to working with local communities and serving the great ward of Bitterne.

“Thank you for everybody that played a part in today’s success."

The new councillor went on to talk about the “strength” of the Labour party.

She said: "Labour took control of the council in May and clearly the Labour council is going from strength to strength because Bitterne is a ward we lost in May but won a few months later.

"I am looking forward to joining the leader of the council, Satvir Kaur and her team to make Southampton the best place it can be."

Leader of the council, Satvir Kaur tweeted: "Huge CONGRATULATIONS to Yvonne Frampton for being the new ward councillor for Bitterne Ward. An area that has been Conservative for years, but finally coming back to Labour now! Thank you to local residents for backing your Labour Council today".

Due to the tight result, the Conservative group, supporting their candidate Callum Ford, requested a recount. However it turned up the same 13-vote difference.

Out of these 1,756, minus rejected votes, the overall results were:

806 for Labour.
793 for Conservative
66 for Green
61 for Liberal Democrats
26 for Trade Union and Socialist Coalition

She will hold the seat until the local elections in May 2023, when, for the first time in over 20 years, all 48 councillors will have to stand for election following boundary changes.

• On the national stage, Labour have held the city of Chester, securing a huge 10,974 majority and a 14% swing away from the Conservatives in the first by-election under prime minister Rishi Sunak. More on the BBC and other national media.

This article is from the Local Democracy Reporting Service or Shared Data Unit. Some alterations and additions may have been made by our site, which is a partner in the BBC's Local News Partnerships scheme. LDRS journalists are funded by the BBC to cover local authorities and other public service organisations, and content is shared with all partners.