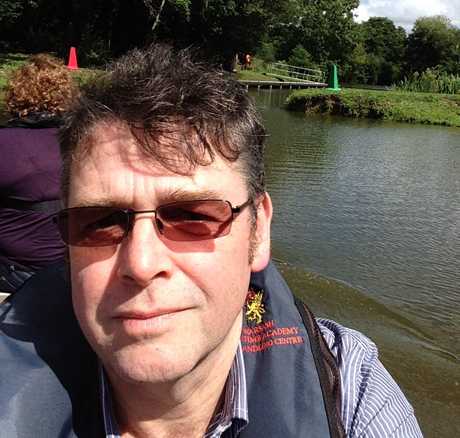 Two months to the day before John F. Kennedy was assassinated, Rónán O'Beirne was born in Baggot Street, Dublin. As an eighteen-year-old, equipped with his Jesuit education, he migrated from an economically blighted Ireland, like many before him, to seek his fortune on the gold-paved streets of London. He secured a job with Haringey public libraries and has been in libraries ever since, moving to Bradford, West Yorkshire in 1988, completing his degree in librarianship at Leeds and later a Masters at Sheffield.

Having taken up a new role as Head of Libraries at Southampton Solent University in August 2015, I now find myself in Bitterne Park. I’ve been living here for just over nine months now. I shop regularly at the Triangle and most days I enjoy a walk around Riverside Park.

August 2015 in Riverside Park, walking beside the river and watching all of the people enjoying the park. When looking for a new home, Bitterne Park appealed to me, because of its position outside the city and yet within easy reach of it. I find that there is something attractive about being situated in view of a bridge across a river or estuary, perhaps because it provides me with a reminder of the city of my birth, Dublin.

Bitterne Park, and in a sense the whole of Southampton, would benefit enormously from better traffic management. The speed at which cars travel through some very narrow streets is way too high and should be lowered, particularly in residential areas.

I would love to see a regular market at the Triangle, even if this needed to start small and build slowly. I really value the ‘Veg Shed’ on a Saturday morning, and believe that similar ventures would add a lot to the area.

Southampton is good because it has so many green spaces and because it’s by the sea and close to the New Forest and the South Downs. It has two great universities, a young population and an emerging cultural quarter.

Not so good are the pollution levels, which are worrying. Traffic management seems poorly thought out; for instance, a better understanding of the requirements of cyclists is needed.

I am passionate about libraries and the ways in which they support people at the various stages of their lives. I am also passionate about providing everyone with the opportunity to learn. In fact, putting these two together, what I’m most passionate about is getting libraries to support learning. I wrote a book about this and my book tours took me to far-flung places like Belgrade, Melbourne and Sydney, where audiences were aghast at the senseless closure of public libraries in the UK – you should be, too! I am, of course, one of the many Friends of Cobbett Road Library, and would encourage people to use this precious facility.

By working at Southampton Solent University. My job is to ensure that library and learning services meet the needs of students and staff. The big challenge at the moment is managing the transition between print-based and electronic resources in a way that sustains an excellent student learning experience. It’s a great job with a great team of people and the rewards, such as seeing the faces of students and their parents at graduation, are highly fulfilling.

Always look on the bright side; change is inevitable; empowering and enabling people is rewarding.

Also, remember to ‘think outside the box’ and ‘stay ahead of the curve’ with your management speak, as it will soon sound ridiculous!

Irrational decisions about resourcing public libraries and the threat of their closure.

I look out of the window of the number 7 bus every morning on my way into the city centre and see so many people driving their cars and texting at the same time – that’s got to stop.

Walking, preferably beside the sea.

It’s got to be The Butcher’s Hook. There’s always a good selection of beer and plenty of interesting conversation. I should become a regular.

I like the stouts and porters – they’re my favourite. Whiskey is always to be looked forward to.

The sound of ponies trotting on cobblestones always makes me smile.

The sound of the breeze through the poplar trees at Riverside Park gives a rush of energy.

The whoosh of the 7am from Southampton to Guernsey climbing to clear the waking city often catches my ear.

BBC Radio 4 is one of my best friends, though I often shout back at it as I listen.

I listen to all sorts of music, particularly where genres collide and overlap. The uilleann piper Liam O’Flynn is someone I greatly admire.

No. My thirty years in libraries, serving the needs of a wide range of readers, has taught me that everyone’s tastes are different. One observation I would make is that readers very often find a comfort zone and remain in it for too long. Be brave. Surprise and challenge yourself with something that expands your horizons. Feed your mind.

Locally, Titchfield Haven and a walk along the Meon Shore, but further afield, London.

State-controlled media undermining society by suggesting that democracy is based simply on voting rather than on a well-informed electorate being able to debate societal issues in a responsible manner as part of an ongoing relationship of mutual trust.

Some politicians scare me.

In the world, I’d like to improve awareness of environmental issues.

In myself, I’d like to improve my ability to calmly accept that I can’t solve the problems of the world.

What keeps you in Bitterne Park? Or what would tempt you to leave it?