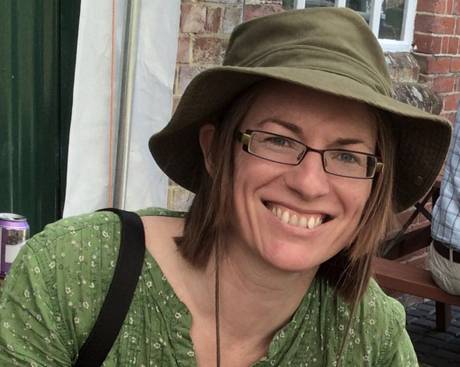 Vikki Gough describes herself as a “nature loving sometime singer”. She says she has fond memories of growing up in the 70s with a houseful of mainly older brothers, loud music, and with an orgone accumulator in the conservatory!

What’s your link with Bitterne Park?

My link to this area is that I've lived here for over 13 years. My kids were born and are growing up here. I'm originally from Eastleigh, though Southampton born. Perhaps the link then is the River Itchen, in which I often played as a kid, though not the Bitterne Park part of it. Bishopstoke and Allbrook were my stomping grounds, if you can say that about a river.

There was a record shop along St Denys Road: I think it may have been called 'Replays’ [see previous comment about Replays here]. And I think I remember a wooden wagon wheel hung on the wall outside. Back in the 80s I used to visit there looking for vinyl bargains. That’s my earliest memory of the area, although not strictly Bitterne Park!

How could area be better?

I’d like to see and hear live music being played, either busking or acoustically in the bars and cafés around the Triangle. Anywhere really: it cheers up a place. It could be by the clock where the healers are, and then you could be entertained as you wait for the lights to change! Also I’d like to see more art. I loved it when the art gallery was up and running in The Old Chemist, and I used to visit it lots. I did a great painting workshop there once. Those silver birds hanging from that tree in the park were stunning (are they still there or have they flown away?) [Still there & refurbished: more info here. Ed.].

There are badgers in Riverside Park! Or maybe just one. I saw one being chased by a dog one night whilst passing through. I was rather startled to see its black and white form hurtling past. That’s the only time I’ve ever seen a live badger. What a shame that is.

I suppose my passion in life is life itself and trying to figure out what its all about. I don't try too hard, mind you, as it seems to jog along of its own accord anyway if I get out the way and let it. 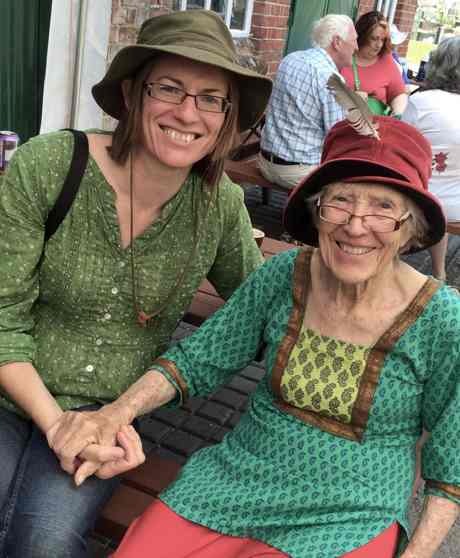 "Me and my lovely Ma"

I work as a community carer which I love doing. I mainly work with elderly people, which is very fulfilling, especially when you get to know someone and can have a laugh with them, which is tremendously uplifting. I try and keep the laughing going for as long as possible – way past the sell by date! Singing songs is good too, if they like that kind of thing.

My career has taught me not to take my own health for granted, and that it’s the simple things in life that matter, like meeting someone’s eyes and sharing a smile. Also the resilience of the human spirit: that can leave me feeling very humbled indeed.

Oh loads of little things, like litter and 'doggy do's' (especially down THAT alley) but the thing that springs to mind as I sit here typing is inconsiderate motorists when I’m out on my bike. You know who you are!

My favourite way of relaxing is probably just lying down and doing nothing.... but I don't seem to do that very often. Other than that, I find walking relaxing, especially in the countryside or next to a river. It always clears my head and calms me down if I feel agitated. I highly recommend it. At least half an hour and preferably much longer. There’s something about the rhythm of it that gets me right. Obviously you are breathing deeply too and hopefully in nice surroundings, and perhaps in good company.

I don't frequent pubs so much any more but when I do it would be to listen to a band or sit in front of an open fire in winter. It would be great if there was a local pub where a piano was being played and everybody joined in for a singsong. I love that kind of thing.

What now? Nothing at the moment though it's pretty hot today so water soon...

An eclectic upbeat mix when I’m walking, sometimes, and similar if I’m cooking. There’s always Beatles in the mix; Rubber Soul is a great album. I love If I Needed Someone by George. Having said that, there's a lot to be said for silence... if you can say that about silence!

I don't really read much anymore. Maybe a few inspirational passages from a fridge magnet in passing, but not books. I’ve just wandered over to my dusty bookshelf and pulled down something that I read to my kids about two years ago. We spent a large part of one weekend curled up together with me reading this book aloud to them. It was on the school’s reading list so I read it (!) and we talked about it and cried over it because it was so very moving. The book's called The Garbage King by Elizabeth Laird.

I really like being out with my family/friends somewhere where the air is clean, the food is nice, we have lots of fun, run around a bit, get tired, go home and chill. Any time of year is good for that. As they say, only the clothing is inappropriate 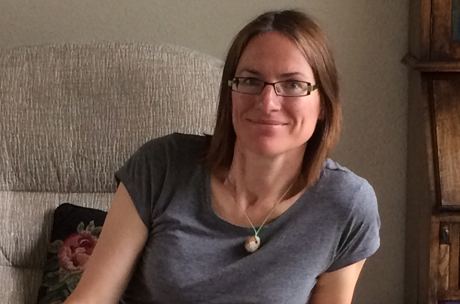 Losing my kids. That’s the most honest answer.

I’ve found this question really hard to pin down to one thing as the list seems endless. But giving it consideration for the umpteenth time, I guess the answer is something to do with how our thinking minds dominate us and we don't question that – especially when those thoughts are of a negative nature, which can get out of control and lead people to do the most horrible things.

So I suppose it’s about wanting us to be able to see beyond the small thinking mind with all its limitations, and be at peace with ourselves/each other. Peaceful people don't start wars. The French philosopher Pascal said: “All of humanity's problems stem from man's inability to sit quietly in a room alone”.

A joke? I’m truly crap (bleep) at telling jokes but I do appreciate a good 'un. This made me laugh:

What inspires you? For me its nature – the less spoilt the better.

Thanks so much for taking part.