Talking to Dot Winteridge: Being the model for famous ‘Art within Reach’ statue

As celebrations are planned for Saturday, October 15 to mark the 25th anniversary of Cobbett Road’s famous statue ‘Art within Reach’, Doreen Le Huquet talks to Dorothy Winteridge, one of the first users of Cobbett Road Library from its opening in May 1939, and the model for the statue.
• Big celebration as library statue celebrates 25th birthday! 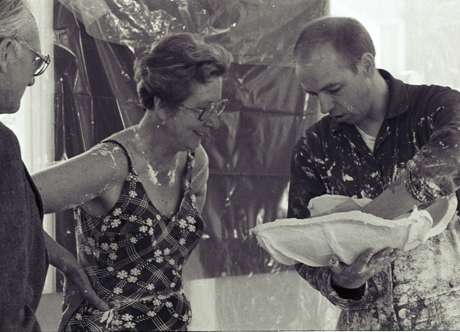 Doreen Le Huquet, who loved being librarian-in-charge at Cobbett Road Library from 1990 until she retired in 1998, caught up with Dorothy Winteridge – known as Dot – one of the first regular users of the library from its opening in May 1939. Dot is still one of Cobbett’s most longstanding supporters, and was the model for the famous statue, which depicts a woman, literally, taking a book out of the library.

Doreen says their chat about the modelling experience ended up being an enjoyable trip down Memory Lane for them both, and she realised they’d known each other for 30 years.

In 1990 Dot had been quite reluctant to put her name down as a possible model, but was urged on by Georgie Webb, who was librarian-in-charge at Cobbett Road at the time and who was instrumental in getting the sculpture arranged. Georgie was, incidentally, the moving force behind the change of name from ‘Bitterne’ to ‘Cobbett Road Library’ as well.

Quite rightly, Georgie thought Dot was the ideal candidate – tall enough to be an effective figure but also an excellent representative of library users, having been a reader at the library when it first opened in 1939, when she was 19.

A year or two later Dot was called up, but was back to the library as soon as possible, living at the time in Macnaghten Road until she married.

Later on Dot's undoubted talent for art was put to great use in running the 'Bitterne Library Art Group', as well as producing many paintings, which were popular purchases with those who saw them. Some of her art will be on display at the library on October 15. 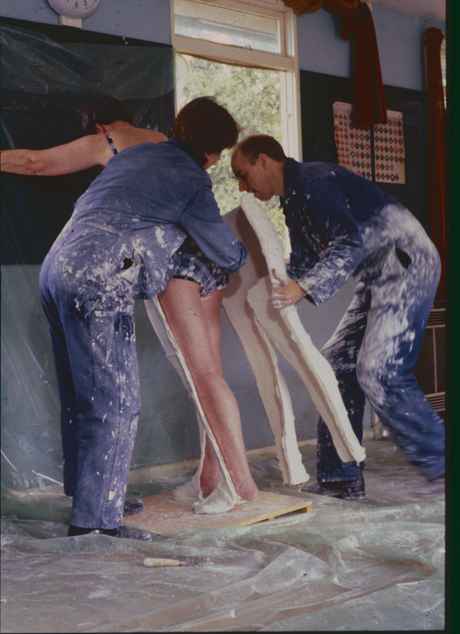 When I asked Dot's main memory of being the model for the sculpture, she said “fun”!  I suggested that might have been because Kevin Atherton, the sculptor, was so kind and pleasant. Dot agreed and said Mary-Jane Opie, who helped when Dot had to be covered with plaster, was also delightful.

Dot had not realised 'what a big thing' it would be and would probably not have embarked on it had she known!

“The plastering was uncomfortable, especially the head…”

She said that the plastering was uncomfortable, especially the head, while Kevin said that a lot of people would not have been able to cope with their face covered, except for breathing holes, while the cast hardened.

Dot can't recall how long it took for the plaster to dry, but remembers being “put in a bin bag” because she was chilly!

“Police were phoned, as someone thought the sacking was covering a body…”

When the statue was put into place, it was covered in hessian, or something similar, and caused some concern: police were 'phoned, as someone thought the sacking was covering a body, and a child coming round the corner was really frightened! 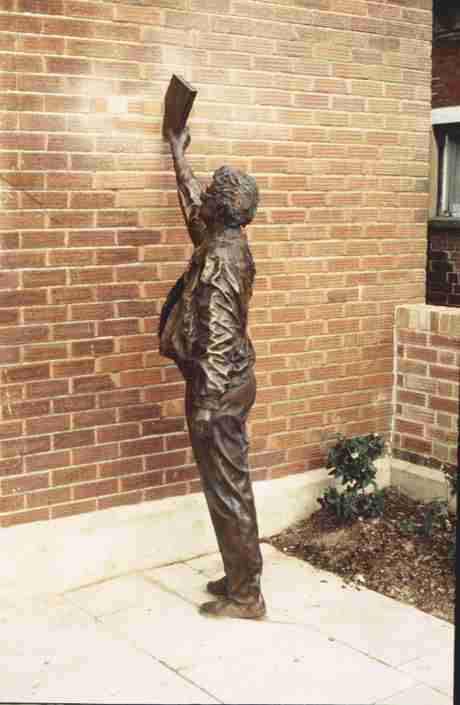 The clothes for the statue were cast quite separately, in London. The jacket on the statue is not what Dot was wearing; she thinks it was Kevin's own, and in the BBC video linked to below and filmed at the unveiling of the statue in 1990, her husband said the facial likeness was very good, “but she’s never in all her life dressed like that!”.

In fact, Kevin asked her for her jacket, but Dot was not prepared to have that ruined: “I liked that jacket,” she said!

Dot was very co-operative with the press at the time, but said she drew the line when the Daily Mail reporter wanted her to pose with a feather duster, 'dusting' the statue.

We gave her a book to hold instead.

• You can watch a BBC video of the original unveiling of the statue in 1990, including an interview with Dot and her husband, on this BBC Facebook page.

And you can see it unveiled again, in real life, on Saturday, October 15 outside what is now Cobbett Hub & Library. There will be a display of Dot’s paintings on the day too, as well as other activities and celebrations – for more information see our previous article.

Thanks to Doreen – and of course Dot – for this article, and to Kevin Atherton and Susan Ormerod for the images. You can see more images of the process with our prevous article.