Southampton based arts organisation, ‘a space’ arts has announced that refurbishment work is due to start on God’s House Tower from next month, to transform it into a new arts and heritage venue.

Regional contractors, Mountjoy, have been appointed to work on the 700-year-old scheduled ancient monument following an uplift in funding from the Heritage Lottery Fund.

Work will begin on site on July 18 and will include conservation work to the building, removing modern internal walls, installing a lift to make to the building accessible, restoring the original doorway on Town Quay Road, and building a new extension to house facilities.

Once complete, the building will include new exhibition spaces, a permanent exhibition of the building’s history located in the Tower itself, a new ground floor café-bar and access to the rooftop views of Southampton Water. A collections gallery will display works from the city’s nationally designated collection.

God’s House Tower is a key element of Southampton’s medieval Town Walls, in previous years being a gatehouse, a fortification - one of the earliest in the country specifically designed for canons, and during the 1700s being used as the Town Gaol.

"It’s an exciting time to be part of Southampton’s cultural scene and a privilege to present a vibrant exhibitions programme which retells the forgotten history of Gods House Tower," he said.

An anticipated opening in summer 2019 will see the grade II listed monument come back into public use after lying empty since the Archaeology Museum moved out in 2011. 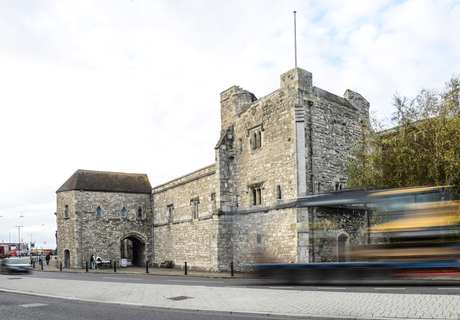